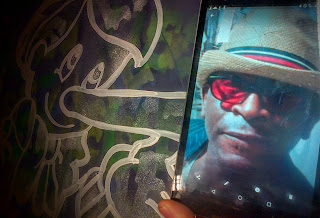 Number Six was a community space which housed Brixton Come together, Blockworkout, Small World Urbanism and Watch this Space project. Brixton Green had faced criticism for not only locking out volunteers but questions on how money they had claimed from The big Lottery Funds 'Awards for All' was not being spent on the 'Brixton stories' and 'Enterprise Zone' projects.

There were concerns as to the appointment of Micheal Groce as he had a long standing criminal record which included violence and had no experience running a centre as demanding as Number Six.
I had assumed the appropriate Police checks had been done by Kevin taylor at the Green man Skills zone and Brad Carroll at Brixton Green.

On June 15th 2015, Micheal groce entered the office of Maria Santos of Brixton Come Together who were based at Number Six and began moving her personal items and furniture from her office. She was in the office and was clearly distressed by his intimidating behaviour towards her. Micheal then came outside to ask me if I would help him move a table. When I saw he was in marias office I refused on the grounds that this was her space and he had no right to move her things.  Clearly aggitated by this Micheal then proceeded to call the Police and as he put it "have us both removed".

The Police came and asked to see both Marias and Micheals contracts to be in the building. They pointed out that this was a civil matter and that should he want us out he would have to go to court and serve eviction notices. In essence he was going to have to act lawfully for once instead of doing things the way he saw fit.

Once the Police had gone Micheal came outside of the building and attempted to physically attack me whilst yelling insults. He was restrained by a few people but continued to shout obscenaties despite 2 children from my project being present and witnessing the whole thing. Micheal Groce was later arrested for this and on the 19th December 2015 he was convicted of the offence of provoking unlawful violence contrary to section 4 (1) and (4) of the Public Order Act 1986. He immediately appealed and a date was set for the Appeal hearing.

On Monday 4th July 2016 at Croydon Crown Court his appeal was heard. In court he tried to convince the Judge that instead of attacking me he was attempting to close an electrical cupboard behind me but with 3 statements against his version of events the Judge was not having it. This only added to my assumption of how arrogant and delusional he really was. His version of events were the complete opposite of what really happened that day. His only defence was to prove I was of bad character and he produced as evidence a youtube video I had made in 2015 confronting the director Brad Carroll on Somerleyton Road, and artwork I had made at the Urban Art Fair that year criticising Brixton Green.

The Judge rejected his evidence as it was clearly not relevant to the fact of did he attack me or not. Micheal despite the overwhelming evidence continued to lie in court and would not answer direct questions. At one point he made a laughable attempt to mention to the judge he was a spoken word poet and performer to which the Judge cut him short and said " I dont care what you are can we please get to the facts". Micheal's fumbling in the witness box was plain to see and exposed the fraud and liar he is. He can talk the talk all day long about injustice in his spoken word poems but at some point he has to come round to the fact that he is a liar and you cant get away with bullying and intimidating women. At what point do you become the oppressor?

The Judge having looked at all the evidence and dismissed his case for Appeal, upholding the original conviction. This Case does however leave serious Questions for Brad Carroll at Brixton Green and Kevin Taylor at the Green Man Skills Zone and also Lambeth Council.

Why were enhanced DBS checks not carried out on Micheal Groce aka Micheal Anthony Bent?

Why was he appointed manager of Number Six despite a well documented Criminal history which includes violence?

Why did Brad Carroll lie about the incident on Brixton Greens website?

Why has no trustee from Brixton Green even apologised to the community over this?

Why did Brixton Green attempt to discredit the victims in an email to Neil Vokes, Stuart Dixon at Lambeth Council and to Councillor Jack Hopkins?

Why did Kevin Taylor of the Green Man Skills Zone not take the appropriate action according to their "vulnerable persons safeguarding policy"?